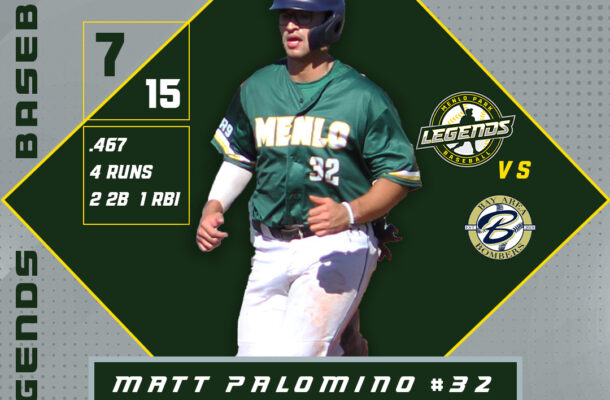 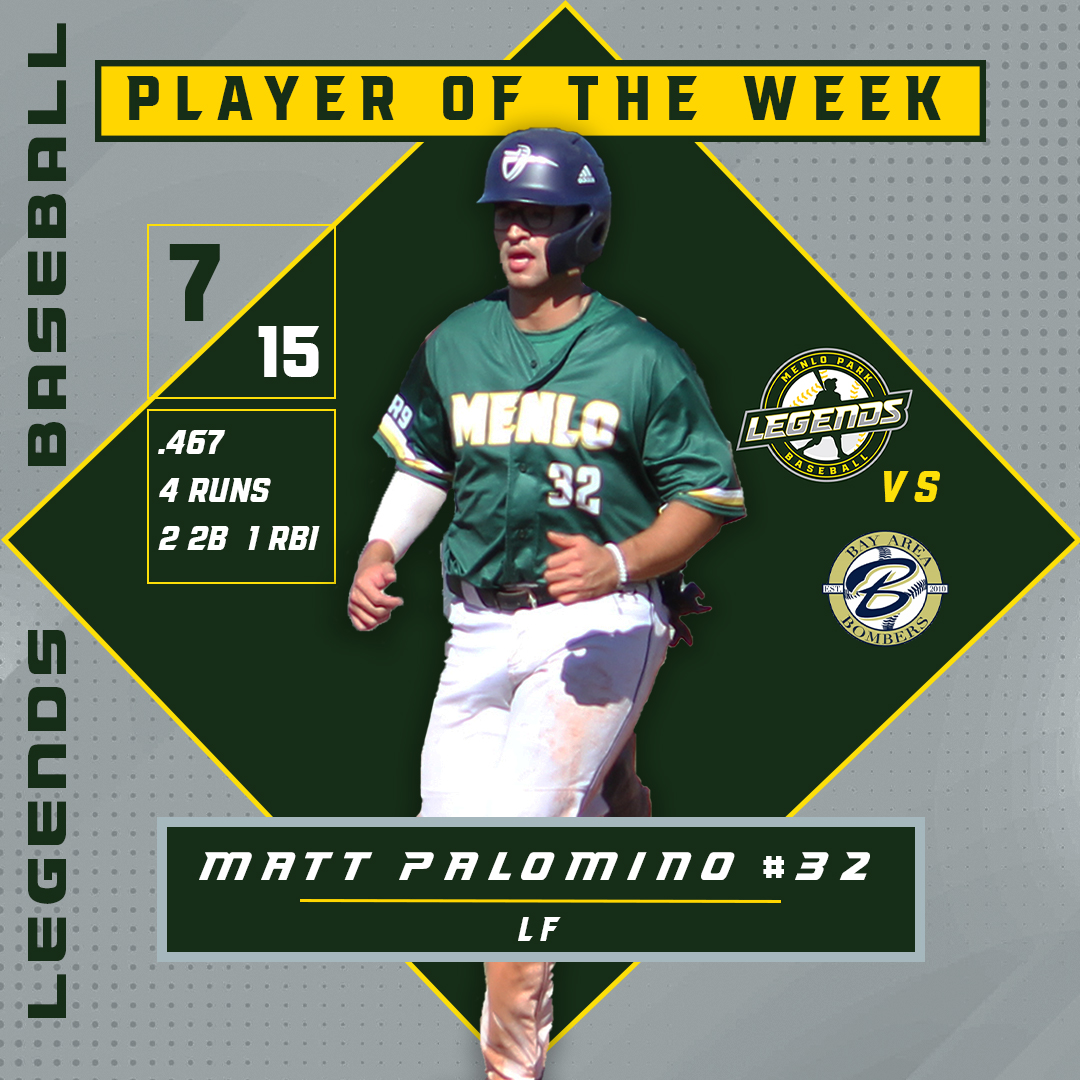 ATHERTON, CALIF. — It was a very promising week for the Menlo Park Legends, who split a four game set with a formidable foe, the Bay Area Bombers. With the series split, the Legends move their record to 4-6 on the young season.

Game one was a tight one between the Legends and Bombers, ending with a narrow 6-5 victory for the Bombers. The two squads locked in a 2-2 stalemate for the first three innings, with the Legends generating their runs courtesy of a two run single from Pablo Ossio, scoring Matt Palomino and Ben Leiphart. The Bombers would strike for two in the fourth, and add one more in the sixth, but the Legends would respond with two of their own in the seventh, courtesy of a Matthys Schouten two RBI triple that would score Will Linberg and JJ Menesini to bring the score to 5-4. The Bombers would add an insurance run in the eighth, and the two teams would head into the ninth with the score at 6-4 Bombers. The Legends got things brewing right away in the bottom of the ninth, as Simon Turner was hit by a pitch and Will Linberg walked to put the tying and winning runs on base. Turner was run for by Riley Moran, who would steal third and score an a throwing error by the Bombers catcher to cut the deficit to one, but that was all she wrote for the Legends as they would fall 6-5. Ben Leiphart was the spark plug for the Legends offense in this one, going 2-3 with a double and a run scored, while Patrick Dixon took the loss despite fanning six batters through four.

The Legends would respond with a 6-4 win in game two in come from behind fashion. Down 2-0 in the bottom of the third, the Legends were the beneficiaries of some suspect defense by the Bombers, as Matt Palomino would score on a throwing error by the Bombers shortstop, and Simon Turner would score on a wild pitch to draw level. The Bombers would regain the lead in the fourth before the Legends would get their big inning, plating three in the fifth. The Legends would load the bases with just one out to kick off the innings bringing Alec Ackerman to the plate. Ackerman was plunked to tie things up at 3. Next up was Aidan Culligan with the bases charged, who promptly singled, scoring both Ben Leiphart and Ray Garcia. The Legends would not relinquish the lead for the remainder of the contest, adding an insurance run on a Pablo Ossio RBI walk and eventually winning 6-4. Riley Moran earned the win in a gritty performance, going five innings, allowing three runs on three hits while fanning four to earn his first win of the Summer. Will Linberg pitched three strong innings out of the pen, fanning six, while Steve Soto slammed the door shut in the ninth for his first save of the Summer. Matt Palomino supercharged the Legends offense going 3-4 with a double and a pair of runs scored.

Game three was all about the Legends from the get go. The Legends struck for four runs in the first four innings, leading wire to wire in a 4-2 victory over the Bombers. Ben Leiphart got things going with an RBI single to score Ryan Farr in the first. Will Linberg would score Matthys Schouten on a sac fly in the second. Matt Palomino singled JJ Menesini home for the Legends third run in the third. Will Linberg chipped in his second sac fly in the fourth, scoring Schouten again to round out the scoring for the Legends. Hayden Friedland got the start and went five innings, surrendering two runs and four hits while striking out five to earn the win. Josh Mathieson and Kirk Kinzler wrapped things up with a combined scoreless final four, with Mathieson going three strong and Kinzler slamming the door shut for the save.

Looking to earn the series win, the Legends jumped out to a 2-0 lead in game four. The scoring got started when Tony Masetti grounded into a fielder’s choice to score Dane Anderson. The Legends doubled up their lead when Ben Leiphart singled Matt Palomino home in the fourth. Starting pitcher Steve Soto tossed four scoreless innings while striking out nine, bringing his ERA down to 0.61 and his strikeout total to a team high 24. Unfortunately, the Bombers would respond with eight unanswered runs, four of which were unearned and scored on four Legends defensive miscues. Matt Palomino picked up his third multi hit ball game of the week, going 2-4 with a double and a run scored.

The Legends will be back in action next week, taking on the Game Prep Trojans for three home contests, and hitting the road for a two game set against the Healdsburg Prune Packers. Have a Legendary Week Legends Fans!