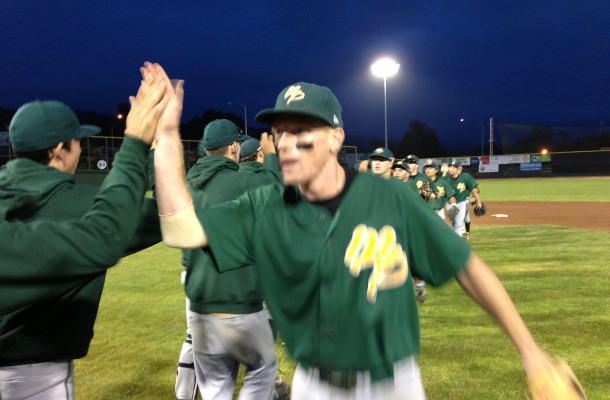 When a team gets only 4 runs in a game where they get 11 hits, it usually is a bad thing. However, the 11th hit proved to be the difference maker, as a Dane Vande Guchte single scored the go-ahead run in the top of the 9th that led the Legends to a 4-3 victory over the Santa Maria Valley Packers.
“When a guy gets 4 hits in a 9 inning game, it stands out.” Manager David Klein said. “However, with Dane, it doesn’t surprise me one bit. He is a fantastic baseball player and he has a great approach at the plate every at-bat.”
In the opening game of the Rawlings Cup tournament, a round-robin where every game is critical, a win was necessary. However, the Packers got ahead early, scoring 2 runs in the 3rd off of Legends starter DJ Sharabi (CSM). The Legends answered in the 4th, after Danny Miller (Mission College) led off the inning with a triple then scored on a Kyle Zirbes (Cañada) sac fly. The Packers scored one more run on Sharabi in the 5th, but once again the Legends responded immediately. In the 6th, Dane Vande Guchte (CSM) led off the inning with a triple, then scored on a Danny Miller single. Sharabi ended up pitching well (5.2 IP, 5 H, 3 R, 6 BB, 7 K’s).
Sharabi handed the ball to Tyler Rios, who got the Legends 2.1 scoreless innings with no hits, 2 walks and 5 strikeouts.
“My curveball and slider were both helping me get ahead, and I felt I had good command with my fastball,” Rios said. “I was able to pound the strike zone and, when I got ahead of hitters, it set up the offspeed pitches exactly how I planned.” And, by the time Rios was pulled, the game had changed for Menlo Park’s benefit.
In the 8th, Vande Guchte led off the inning with a single, his 3rd hit of the day. Danny Miller got his 3rd hit of the day with a single to move Vande Guchte to 2nd. After a wild pitch moved both runners, Zirbes hit his 2nd sac fly of the day to score Vande Guchte and tie the game.
Then, in the 9th, Luke Pappas (Stanford) led off the inning with a walk. Logan Trowbridge (Cal-State Bakersfield), who arrived in the 8th inning after summer school in the Bay Area, pinch hit and reached base on a sac bunt error. After the next two hitters got out, Vande Guchte stepped up to the plate.
“I was thinking, ‘Make the pitcher elevate and hit the ball through the hole,’” Vande Guchte said. “After the first pitch was a ball, I looked for the fastball up and got it on the 3rd pitch.”
Vande Guchte hit a single through the hole to left field, and coach Dustin Woodward sent Pappas home. When the throw was wide of the plate, the Legends had their first lead of the game. Mike Dodakian (Dartmouth) came in and closed the door for the Legends, who got a big win.
The San Luis Obispo Blues defeated the Bakersfield Sound in the other Rawlings Cup game, 4-3. When the tournament continues Friday, the Legends (1-0) will play the Sound (0-1) at 2pm, while the Blues (1-0) play the Packers (0-1) at 6pm.