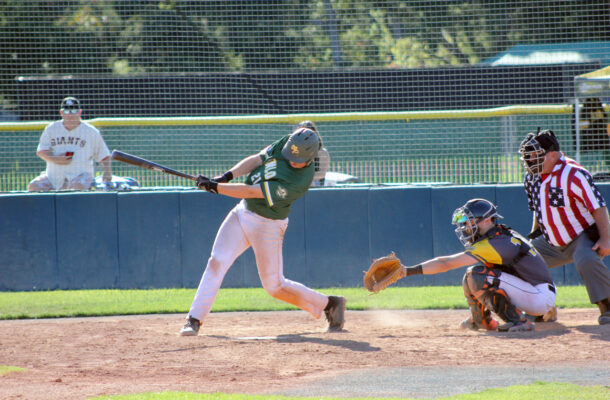 ATHERTON, CALIF. — The Menlo Park Legends capped their regular season this week with a stretch of six games. The Legends split those contests, but had one of their best weeks both offensively and from a pitching standpoint. Legends player of the week Alec Ackerman set the pace for Menlo Park, going 10-19 at the plate with three doubles, a home run, and six runs driven in, while Tony Masetti chipped in five doubles and a team high seven RBI on the week. On the mound, plenty of pitchers stood out, including Connor Robinson, who fanned nine over six innings, and Hayden Friedland, who tossed four innings without allowing an earned run. The Legends will now play the Bay Area Bombers in the opening round of the BACL Playoffs on Tuesday.

The Legends kicked off the week with a one off contest against the BACL leading West Coast Kings Grey squad. Menlo Park built up an early 4-0 lead with RBI from Matt Palomino, Will Linberg, Cooper Paulino, and Elie Kligman. That lead would hold until the seventh inning, as through the first six, Aman Khera, Hayden Friedland, and Kirk Kinzler shut out the powerful Kings Grey lineup. A nine spot for the Kings in the seventh would do the Legends in, as they eventually fell 10-4. Cooper Paulino, Alec Ackerman, and Will Linberg all tallied two hit ball games, with both of Ackerman’s hits being of the two base variety.

The Legends responded with a 17-10 offensive onslaught victory over TKB. Pitching shutout out TKB for the first five innings, as Adrian Lopez and Josh Mathieson surrendered just five hits while fanning five in that span to help the Legends to a 13-0 lead. TKB would come roaring back for 10 runs late, but the Legends also continued to keep the offense rolling to earn the 17-10 victory. The offensive fireworks were headlined by Tony Masetti, who went 4-5 at the plate with three doubles and four runs driven in.

On the road for the first time this week, the Legends traveled to Sonoma for a non league tilt with the Sonoma Stompers. The Legends battled tough in this one, but eventually fell 4-0. Logan Snow, Hayden Friedland, and Jacob Odle combined for 5 innings of shutout baseball on the mound, while Cooper Paulino collected a pair of base knocks to lead the offense in this one.

Back at home, the Legends returned to game two of their three game set with TKB. This contest came down to the wire, as the Legends found themselves behind 11-7 in the bottom of the ninth. The Legends, however, would load the bases with no outs for the top of the order. Cooper Paulino started to chip away at the deficit with a sac fly that scored Mathys Schouten. Tony Masetti would come around to score on a wild pitch and Matt Palomino would single, to once again load the bases for Alec Ackerman with two outs and the score sitting at 11-9. Ackerman promptly bashed a double, one of his four hits in the contest, to clear the bases and win the game for the Legends in their final home regular season contest of the Summer.

The Legends capped their three game series against TKB on Saturday in Palo Alto. This one was all about the Legends, who, after falling behind 1-0, rallied for seven unanswered runs in the victory. Alec Ackerman stayed hot, with three hits, including a three run home run, while the bullpen, composed of Aidan Culligan, Elliot Pigati, Ray Garcia, and Jacob Odle, tossed 5.1 innings of scoreless ball.

The weekend finale came against Sonoma once again, and ended similarly to the first matchup with the Stompers, as the Legends fell 5-0. The Legends tallied six hits, all singles, in the contest, and were unable to push any runs across against the stellar Stompers pitching staff.

As the regular season has come to an end, let’s take a look at the Legends statistical leaders for the Summer. At the plate, infielder Cooper Paulino led the Legends with a .417 batting average. Ryan Farr tallied a team high 38 hits for the summer. Elie Kligman left the yard a team high three times, while Ryan Farr and Matt Palomino ended the summer tied with a team high 21 RBI each. On the pitching front, nobody tossed more innings than Steve Soto, going 33.2 innings over the summer and striking out a team high 42 batters. Cole Dixon led the team with three wins on the bump, while Kirk Kinzler was the Legends top late innings man, with three saves in three attempts. The summer ERA leader for the Legends was Hayden Friedland at 3.20. On the base paths, Matthys Schouten and Tony Masetti each swiped 10 bags successfully.