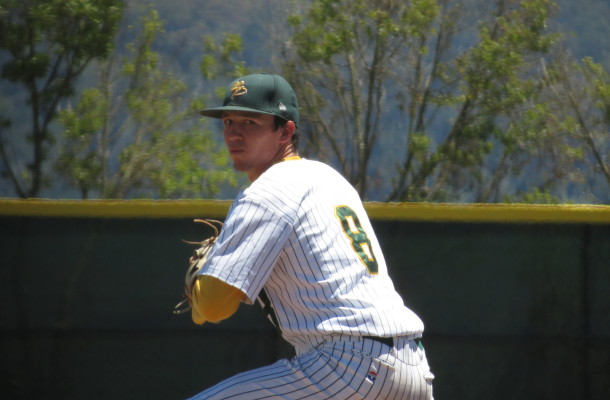 The Menlo Park Legends had a plan as they went to the Northern Division of the Rawlings Cup tournament: Win the first 2 games of the Rawlings Cup, then get ready for the game against the host San Luis Obispo Blues in what was expected to be a winner-take-all game for the Northern Division. They completed the first part of the plan on Friday, beating the Bakersfield Sound 5-4 to become 2-0 in the Rawlings Cup. After the Blues beat the Santa Maria Valley Packers 24-4 Friday night, the dream matchup was set: Legends vs. Blues for the right to play in the championship of the Rawlings Cup on Sunday in Santa Barbara.
“I feel extremely satisfied that we executed the plan that we set.” Coach David Klein said. “We knew that we were facing two competitive baseball teams, but we felt like we were the better team, and we fought hard to win these games.”
The win didn’t come easy, even though DJ Zapata (Santa Clara) tried his best to make it that way. Zapata, making his first true start of the season, pitched masterfully, going 6.2 innings while only allowing 3 runs, 5 hits, 2 walks and striking out 11 Sound hitters.
“Zapata really impressed me today.” Klein said. “I knew he wanted to start for me the whole time, but this was extremely impressive for his first start. DJ had command of all his pitch and attacked the zone all game.”
“The change-up really worked for me.” Zapata said. “I’ve been experimenting with it for a little while, and today it really clicked.”
The Legends hitters gave Zapata the support he needed in the 3rd, when an early rally formed. Geo Saba (Stanford) came up with the bases loaded and 1 out. During his at-bat, a wild pitch moved all the runners up and gave the Legends a 1-0 lead. Saba then grounded out, but moved the runners up again, making it 2-0. Then, Danny Miller (Chico State) hit a rocket single to score the 3rd runner, and the Legends suddenly had a 3-0 lead.
The Legends added to the lead in the 5th, when 2 walks and a hit-by-pitch loaded the bases with nobody out. Danny Miller stepped up again, and delivered again, getting 2 RBI’s to give the Legends a 5-0 lead.
“I don’t change my approach with runners in scoring position.” Danny said. “I just try to keep it basic, and look to hit the ball hard. A coach can never get on you if you hit the ball hard.”
Zapata got through the first 6 innings without giving up a run, but the Sound finally got to him for a run in the 7th. With a pitch count climbing, Coach Klein pulled Zapata with 2 outs in the 7th. Even with the small blemish in the 7th, Klein was overjoyed with the start, adding, “DJ is going to be in our rotation for the rest of the summer and will start some big games during our playoff push.”
The Sound added 3 more runs off of reliever Tyler Rios to make it a 1-run game, but Rios (Cañada) got a big strikeout to keep the Legends ahead, 5-4.
From there, Mike Dodakian (Dartmouth) came in to close out the last 2 innings for the Legends. Dodakian put the tying run on base in both the 8th and the 9th, but sealed the deal for the Legends. Manager Klein couldn’t be happier.
“We tend to play our best ball when the bright lights are on and we are on the biggest stage. With our ace, Andrew Herrera (SJSU) pitching, all we need is a few clutch hits and I feel we can get to Sunday.”
Gametime for the Legends and the Blues is approximately 4:00pm.