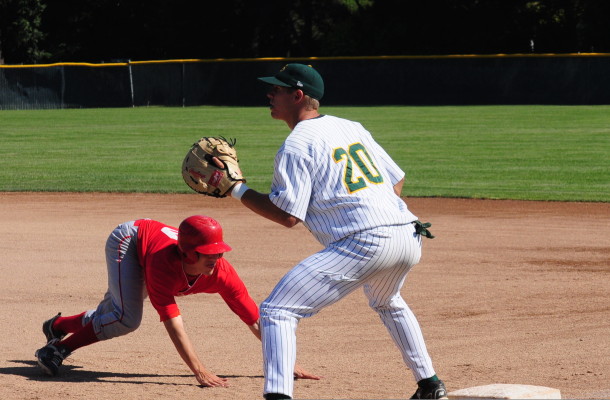 The Menlo Park Legends (0-2) took on the Walnut Creek Crawdads (0-0) Monday night in Walnut Creek for the first intra-division series of the season. Coming off a tough walk-off loss in Palm Springs, the Legends were still searching for their first win of the 2014 season.

Michael Chavez, the left-handed pitcher from West Valley College, took the hill for the Legends and pitched six solid innings giving up only two runs, both unearned. His second effective outing in a row, the southpaw is proving to be a force worth reckoning with for Menlo Park. Chavez was replaced in the 7th inning by Matt Blais. Blais, the soon-to-be UC Davis Aggie from Junipero Serra High School, tossed two scoreless innings to finish the game for the Legends.

Monday’s game was marked with missed opportunities for Menlo Park as they had two runners thrown out at the plate due to over-aggressive baserunning. One instance occurred with Brandon Coborn being gunned out after the Crawdads’ second baseman was able to convert a spectacular double player after tripping in shallow right field.

The Legends were able to push one run across the plate on a passed ball, but still lost the game by a score of 2-1. Heading into Tuesday’s game the Legends are owners of a 0-3 record and are fired up to earn their first win.

The Menlo Park Legends took on the Walnut Creek Crawdads for the second game of the two game series in Walnut Creek on Tuesday. The game was all too familiar; same place, same time, and even the same score (2-1 Crawdads).

Devin Smith started on the mound for Menlo Park. He threw five scoreless innings, surrendering only one hit.

Cole Johnson, from the University of Central Arkansas, came into the game to relieve Smith in the 6th inning. He quickly found himself in trouble as two Crawdad runs scored on a hard hit single.

Zach Grotz took over on the mound and worked his way out of the 6th inning jam. He remained in the game and kept the Crawdads scoreless over the remaining innings.

The Legends had a late inning rally in the 9th as Colton Frabasilio scored Wes Hoskins from second base on a hard hit chopper to third. The ball bounced off the glove of the third baseman and rolled into left field. Matt Glomb was thrown out on the play as he tried to advance from first to third. With two outs and the tying run on first base, Kyle Zirbes popped up to right field to end the game.

The Legends are now (0-4) on the season having lost three 1-run ball games in a row. General Manager David Klein acknowledges that the team’s performance has been rusty to start the season, but he is confident that the Legends will be on the other side of the scoreboard soon. With quality outings coming from all Legends pitchers, it is only a matter of time before the Menlo Park bats catch up.

The Legends’ next series will be Thursday and Friday in Marysville, California against the Gold Sox. Menlo Park swept the series last season and will look to do the same this week on the road. Tim Willis will be on the hill for the Legends on Thursday and Matt Blais will pitch Friday.