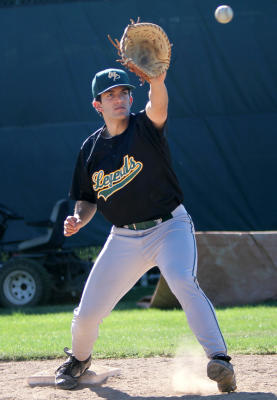 It’s doubtful Geo Saba found much time to sleep this summer. Not with a schedule that required him to take 10 units at Stanford, drive to San Francisco for an internship at the mayor’s office and return to Redwood City for baseball games at Canada College as a member of the Menlo Park Legends.
What’s his trick?
“Coffee,” Saba said with a chuckle. “It’s been an amazing summer. I’ve had a lot of opportunities that have presented themselves, including playing for the Legends.”
Accepting an invitation to join the Legends was a no-brainer for the 6-foot-2, 205-pound first baseman with the Cardinal. Especially with such a busy calendar.
At least the classroom portion is over for the political science major. Saba took a sociology course at Stanford that detailed the problems he encountered while doing constituent work at the mayor’s office, or as he likes to say, “Helping real people with real problems.”
For 20 to 30 hours a week, Saba drives from his family’s home in San Mateo to his internship in San Francisco. On Wednesday, the 20-year-old helped homeless people find food stamps and shelter. Real problems such as poverty, homelessness, civil rights issues and discrimination are no longer facts Saba only learns from books.
“These are things that we read about at Stanford that often you don’t experience first hand outside of the bubble,” he said.
In September, Saba will leave for Washington, D.C., to boost his government resume at another internship.
It’s an opportunity Stanford baseball coach Mark Marquess brought up when Saba was a freshman straight out of St. Francis in Mountain View in 2011. But since only juniors and seniors were eligible, Saba didn’t give it much thought until he applied in the winter.
Along with other Stanford students, Saba will live in the BSIW building — named after the Bing Stanford in Washington program. He will depart for an internship in the morning and return in time for dinner. Then, at night, different policy makers drop in to teach them.
Marquess didn’t hesitate to give his blessing, even if that meant the redshirt sophomore will miss fall ball.
“It was a painless conversation,” said Saba, who plans to maintain a workout regimen in D.C. “He was happy for me, was excited for me and that’s sort of been the kind of support I’ve gotten at Stanford. They’ve tried to develop the whole person. It is a baseball program, but Coach Marquess places a huge important in academics. We meet with him each quarter to go over our class schedule. He makes sure that everyone graduates a quarter early. So we’re really getting the whole deal over there.”
The missing piece is playing time at Sunken Diamond.
Saba, who currently sports a 4.04 GPA, was named to the Pac-12 Baseball All-Academic First Team, but spent the entire 2013 season sitting behind first baseman Brian Ragira, who was drafted by the San Francisco Giants in the fourth round in June.
Will the time away from the Stanford baseball program hurt his chances of cracking the lineup in the spring?
“The thing is, you don’t want to count him out,” said Mike Oakland, his baseball coach at St. Francis. “To say that he’s not going to play at Stanford would be a mistake. I definitely could see him working his way into the lineup at some point and time, just because of how bad he wants it. So you never really know with that kid. Unbelievable work ethic for that guy. …
“Regardless of what happens baseball-wise at Stanford,” Oakland added, “I guarantee you that Geo Saba will be an extreme success at some point in his life in some field.”
Saba tweaked a hamstring last month, which limited his ability to produce for the Legends, sort of. He still leads the team with a .359 batting average in 64 at-bats and crushed a grand slam Sunday to help the Legends clinch a spot in this weekend’s Far West League playoffs. Eight of Saba’s 23 hits have been for extra bases, including three home runs.
“He just gets to the plate, grips the bat and rips the ball every time,” Legends founder and manager David Klein said. “He doesn’t really see a lot of pitches. He just gets up there and squares up a ball early in the count almost every time.”
“I try not to take these at-bats for granted, or just playing for granted,” Saba said. “You never know when it’s going to be your last swing or your last game. So I just go out there, have fun.”
The Legends had to wait until the 10th game of the season for Saba’s debut, which was an 0-for-5 performance at the plate. But each of those swings was a line drive right at someone.
“I take this approach a lot of times in life: worry about the process and not the result,” Saba said. “And I think it helps a lot with baseball, because you could do everything right, have the perfect swing, you can hit the ball perfectly and you could be out. But as long as you’re doing the right things to put yourself in the best position to be successful, you can’t be upset with your effort or the result.”
The No. 4 Legends (22-21) take on the top-seeded Humboldt Crabs, hosts of the Far West League playoffs, tonight at 7:30.
Class is done. Baseball could be over after this weekend. If the intership at the mayor’s office is all that’s left, maybe Saba could switch to decaf. At least until he leaves for D.C. next month.
“I really enjoy public service,” Saba said. “Now whether that’s as a senator or as a teacher or as a social worker, wherever I can make a difference.”