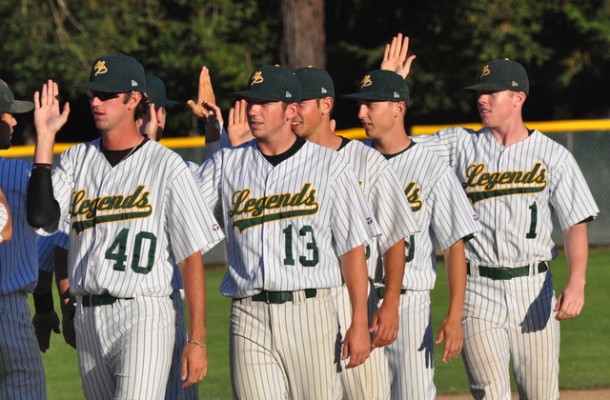 When it comes down to it, playing good baseball is what gets it done for the Menlo Park Legends, who had their home opener Tuesday evening after eight road games. Menlo Park played fundamentally sound in a 7-1 nonleague win over Atwater at Canada College in Redwood City. Menlo Park (8-1) and Awater (3-4) play tonight at Canada College at 5 p.m.
Two great defensive plays by Legends right fielder Logan Trowbridge saved at least two Atwater runs in support of winner Shane Turner. Trowbridge, out of Aptos, played mostly catcher at College of San Mateo last season.
With the Aviators’ Karson Canaday on at third base and with one out in the top of the first, Trowbridge fielded a medium-deep fly ball by Matt Moceri. Trowbridge came up throwing to the plate, the ball reaching catcher Ian Josh on one hop. Josh was waiting with the ball before Canaday arrived, completing the inning-ending double play.
“I knew Atwater was going to be aggressive,” Trowbridge said. “They were aggressive the whole first inning. They were stealing bags and stuff. My center fielder gave me a heads-up, telling me he was tagging. I was coming up throwing. Using the turf, I wanted to give the catcher a good one-hop. I tried to put it on the money.”
With one out in the sixth inning, Trowbridge made a diving, shoestring catch to rob Moceri of possible extra bases. Atwater’s Alex Medin thought the ball was going to drop because he ran on contact. Trowbridge threw to Kyle Zirbes, who was covering the bag at second for the easy double play.
“I didn’t know if I could get to it off the bat,” Trowbridge said. “I tried to get a good angle on it. I slid to my left side. I think it helped turn the game around. It gave us some momentum.”
“Trowbridge is a gamer,” Legends manager David Klein said. “He always wants to be in there. He’ll give you his best, whatever he’s got.”
Zirbes walked to start the fourth inning against Atwater southpaw starter Charles Cormier. Cleanup hitter Danny Miller went the opposite direction against Cormier, sending a low liner over the left field screen for a 2-run homer, his first as a Legend. Miller played two seasons at Mission College in Santa Clara.
“I was looking for something away because he was painting away,” Miller said. “I finally got a hold of it. He was a tough pitcher.”
Miller was plunked by two different pitchers his final two at-bats. Retaliation?
“I don’t know if it was planned, but that happens,” Miller said.
The Legends got some breathing room in the sixth, but it took a 2-out rally to score three runs. Designated hitter Skylar Brewer, a Menlo-Atherton grad, sent one high over the left field screen for a solo homer.
Matt Glomb then tripled to deep center field in front of a walk by Dane Vande Guchte. Brandon Coborn rolled a single over the third base bag for a run. Ian singled over Canaday at second base for another run.
Glomb singled in a run in the seventh inning, but left fielder Paul Cutler gunned down Trowbridge at the plate with a perfect throw on the fly. Vande Guchte singled to right for a second run.
Canaday flashed some leather in the second inning, running down what would have been a base hit by Glomb. Canaday made the over-the-shoulder catch down the first base line in fair territory.
The Legends turned a third double play, which came in the third inning after the Aviators had tallied their only run of the game on an RBI single by Nate Backes.
Mike Dodakian pitched the final three innings for the Legends to record a save.
“We’re playing really well,” Miller said. “Everyone jokes with everyone. We’ve jelled together, quickly.”
“We’re not doing the little execution things I would like to see, like bunting guys over, being aggressive and taking an extra base,” Klein said. “I’m still very happy.”