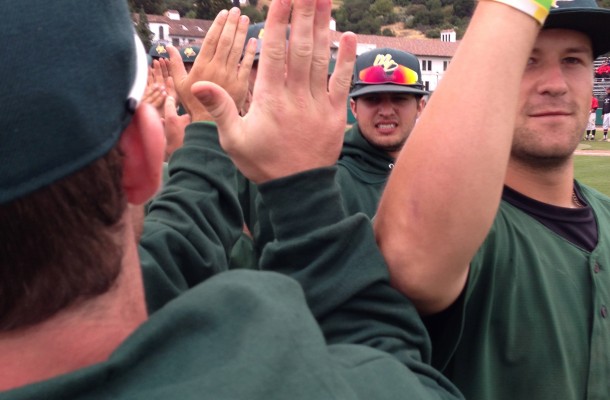 Going into Sunday, many people who were followers of the Menlo Park Legends were concerned. The Legends had lost 6 straight games, all of them Far West League games, including 2 home games to the Walnut Creek Crawdads, 4-3 on Friday and 7-1 on Sunday. Now, with a doubleheader at Saint Mary’s College against the Crawdads, the Legends needed to sweep the doubleheader just to keep hope of a .500 first half of the Far West League schedule. When Sunday was said and done, the Legends had bats that finally started to get warm, a middle of the lineup that showed how deadly it can be, a bullpen that looked rock solid and 2 wins.
In Game 1, left handed starter Adam Frank (Dartmouth) gave the Legends 4 strong innings with only 1 unearned run allowed. The Legends and Crawdads traded single runs in the 4th and 5th, but the Legends took the lead in the 6th when Wesley Hoskins, who comes to the Legends all the way from South Africa, led the inning off with a double and scored on CJ Jacobe’s single. Hoskins went 3-4 in Game 1 with all 3 hits being doubles, with the 3rd double scoring Kyle Zirbes in the 9th to give the Legends an insurance run and a 4-2 lead. Nick Medeiros (Santa Clara, Bellarmine grad) got the win for the Legends, giving up 1 run in 3 innings, and Mike Dodakian (Dartmouth) got a 2-inning save.
Game 2, which was only a 7-inning game, saw the Menlo Park bats catch fire. The Crawdads jumped on the Legends early, scoring 2 in the 1st and 3 in the 2nd. Tyler Rios (Cañada College, El Camino grad) came in and limited the damage at 3 in the 2nd and then carried the Legends through the 5th, only allowing 1 run on a solo homerun in the 5th.
The Legends lineup used power and speed early to cut into the lead, led by an Ian Josh (Sterling College in Kansas) 2-run homerun to left field in the 2nd, and Dane Vande Guchte (CSM) steal of home on a double steal in the 3rd. When the Legends came up to bat in the 5th, however, they saw themselves trailing 5-3. Vande Guchte led off the 5th with a triple, then scored on a Danny Miller (Mission College) single. After Kyle Zirbes (Cañada College, Menlo-Atherton grad) reached base on an error, the Legends had a big threat going. Then, Geo Saba (Stanford, St. Francis grad) delivered with a 2-run double to left that gave the Legends the first lead of Game 2. The Legends tacked on 2 more on a throwing error from the Crawdads, and after the solo homer that Rios gave up, it was 8-6 Legends. In the 6th, Vande Guchte led off with a double, Brandon Coborn (Feather River College) hit the next pitch for a single, and then Danny Miller hit the very next pitch over the scoreboard at Saint Mary’s in right-center to give the Legends an 11-6 lead. After Saba, who got 4 hits in the doubleheader, hit his 2nd double of the game, Hoskins walked, reaching base for the 7th time in 9 plate appearances on the day. Then, Matt Glomb (Santa Clara, Bellarmine grad) hit a 2-run single which scored both of the runners and gave the Legends a 13-6 lead, which would be the final score.
Overall, its safe to say this was a good way to break out of a 6-game losing streak. The Legends are back in Far West League action on Tuesday at Laney College against the Seals Baseball Club, with first pitch at 6:30pm.