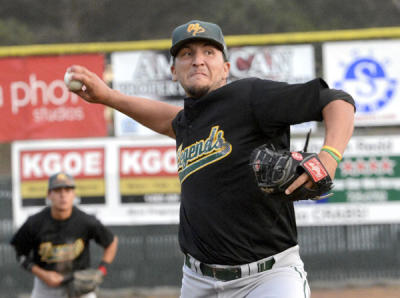 ARCATA — A familiar pattern repeated itself on Friday evening.

Andrew Herrera, the Menlo Park Legends’ right-hander, looked composed and even dominant — 10 strikeouts with no walks in seven innings on the bump — as he stymied the Crabs in his third good outing at the Arcata Ball Park in the last 12 months.

All three runs scored Friday were of the unearned variety, and the Legends left the field with a 2-1 win in their first-round matchup of the Far West League’s postseason tournament.

Herrera, while playing for the Southern Oregon Riverdawgs, pitched eight strong innings against Humboldt in the 2012 FWL tournament. And seven weeks ago, on June 14, he picked up the W when the Legends beat Bradshaw and the Crabs 4-2.

”He’s (Herrera) already had a lot of success here, so it was a familiar situation for him,” said Legends manager David Klein. “He did just what I expected, took us deep into the game, pounded the zone, kept them off balance.”

The loss drops the No. 1 seed Crabs (38-14 overall) into today’s once-beaten bracket game at 7:30 p.m. against the No. 3 seed California Warriors (32-23). The loser of that game will drop out of the double-elimination tourney, while the winner will play on Sunday morning at 10 a.m.

”Here we go again. Now we have to do it the hard way,” said Nutter, whose team must win four in a row to capture the FWL postseason flag. “We’ve definitely got the pitching and the hitting. The guys just got to believe.”

Menlo Park got a gift run in the top of the first.

The Crabs tied it in the bottom of the second.

The Legends manufactured the decisive run in the top of the eighth.

Vande Guchte led off by beating out a high-hopping infield single, and again went to second on another good Trowbridge sac bunt. Goodrich then misplayed Geo Saba’s grounder, putting runners at the corners.

Danny Miller followed with an infield grounder that, had the Crabs turned two, would have ended the inning. But an odd hop caused second baseman Hendrickson to have to tag Saba, while Vande Guchte scored easily from third.

The Crabs twice stranded runners at third base, left two men aboard in the eighth, and another in the ninth.