Legends Battle but Come up Short in Palm Springs 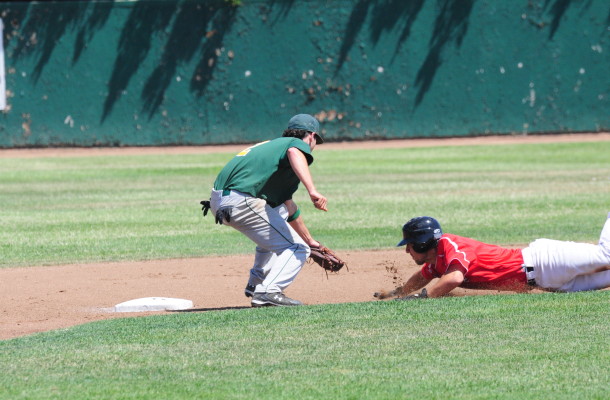 The Menlo Park Legends dropped the first of a two-game series against the Palm Springs Power on Friday by a score of 14-6.

After an eight-hour drive down to southern California, the Legends prepared to play their first series of the 2014 season against the nationally ranked Palm Springs Power. The Power, managed by Harry Gurley, have been one of the best colligate summer teams in the nation year in and year out. Ready to show what they were made of, the Legends took the field Friday evening in Palm Springs for the first game of the weekend against the Power.

Since most of the Legends’ roster had never played together as a cohesive unit, General Manager David Klein used Friday’s game as a “staff day,” focusing on discovering what talents individual players possessed.

Michael Chavez, a lefty First Team All-League pitcher from West Valley College, got the start for the Legends on the mound. Picking up three strikeouts and allowing only one hit, Chavez shut down the Power for the first two innings of the ballgame. The second inning was capped off with a spectacular throw from right fielder Isaac Feldstein to catcher Dakota Hernandez to record the last out of the inning at home plate.

Parker Swindell entered the game for the Legends in the third inning to relieve Chavez. Swindell, unable to find the strike zone, allowed three earned runs before being pulled from the game. Steven Miller came in in the fourth inning and was roughed up by the Power bats as well, giving up six runs in his one inning of work.

The second half of the game provided hope for the Legends squad, as they were able to break through against Power starter Hayden Rodgers. Rodgers, teammate of Legends’ catcher Bo Hernandez, led all BYU pitchers in ERA during the 2014 spring season. The Legends’ offense picked up their game and plated six runs thanks to Wes Hoskins’s three RBI’s. Jordan Winawer and Isaac Feldstein each picked up an RBI as well.

Sam Alton came into the game for the Legends following Miller and allowed three earned runs over three innings of work, picking up three strikeouts in the process. Tom Flippin and Tyler Cyr closed out the last two innings without allowing any further damage.

GM Klein acknowledged that the Legends’ pitching struggled, but said he felt good about how the team picked-up their performance in the second half of the game saying, “[The Palm Springs Power] are not 14-6 better than us. That score does not reflect a difference in talent”.
Game two of the two-game series in Palm Springs will take place Saturday evening, as the Legends will look to even up their record at 1-1 and head back to Menlo Park on a win.
Game Two

The Menlo Park Legends took the field Saturday night for the second game of the two games series vs. the Palm Springs Power. After losing the first game of the series 14-6, the Legends came out fired up and ready for redemption. Another declared “staff day”, multiple Legends players saw opportunities in the field as the coaches assessed their skill base and team cohesion.

Things heated up quickly as the Legends loaded the bases in the top of the 1st inning, but a Kyle Zirbes looking strikeout sent the runners back to the dugout unsatisfied.

Devin Smith from Alabama A&M started the game for the Legends. He threw two scoreless innings allowing only one hit. Zac Grotz, from the University of Tennessee, came in to pitch in the 3rd inning. He gave up one run in one inning of work.

The top of the 4th started off with Jordan Winawer and Bo Hernandez both singling for Menlo Park. Winawer took home on a passed ball to even up the score at 1.

Steffan Simmons, from Lindenwood University, came into the game to replace Grotz on the mound for the bottom of the 4th inning and surrendered 2 more Power runs.
Tim Willittes from Cornell was the next Legends pitcher utilized. He pitched two scoreless innings.

Cole Johnson from the University of Central Arkansas came in to pitch in the bottom of the 7th inning with the score still 3-1 in favor of the Power. He gave up one run in the inning to give the Power a 4-1 lead going into the 8th.

In the top of the 8th inning the Legends strung together three hits to load the bases. Shortstop Trevor DeMerritt came through with a clutch single to score the runner from third. Dane Vande Guchte added two more to the scoreboard with a single of his own which tied the score at 4.

A damage-free inning from Ryan King, out of West Valley College, kept the score tied heading to the 9th inning.

Matt Glomb entered the game in the 9th and delivered a two run single to give the Legends a 6-4 lead with only three outs lefts in the game.

However, the Power rallied late and were able to walk-off on a broken bat infield flare that gave them a 7-6 lead.

General Manager David Klein expressed that he was very impressed with his team after the two-day trip to Palm Springs. He said that this Legends team is made up of some real fighters as evidenced by the late inning pushes in both games this weekend.
Klein is excited for Menlo Park’s next series against the Walnut Creek Crawdads, which will be a two-game series on Monday, June 2nd and Tuesday, June 3rd at Laney College starting at 5:30 PM both days. This series will be the team’s first intra-division match-up and will feature two skilled teams with speed, power, and pitching depth. Make sure to come out and support your Menlo Park Legends this week! As always, FIRE IT UP!