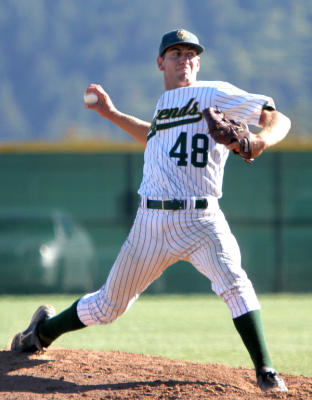 With the pitch count reaching Tim Lincecum no-hitter status, there was still no action in the Menlo Park Legends’ bullpen Friday night at Canada College. Why would there be? The team’s closer had stifled the Neptune Beach Pearl over eight innings already and only needed three more outs, which is his normal role.
With his 136th pitch, right-hander Mike Dodakian recorded the 10th strikeout as the finishing touch on his masterpiece in a 7-3 much-needed victory for the Legends.
“I took enough Advil, so it doesn’t feel too bad,” Dodakian said of his arm. “I mean, I’ve never really thrown nine innings before. Seven is the longest I’ve ever thrown because at school, at Dartmouth, I’m just a relief pitcher.”
The coaching staff knew that Dodakian, in his second start of the summer, sat at 123 pitches after eight innings. Then again, he had yet to walk anyone and had allowed one hit over the four previous innings.
“He was just throwing a gem and he had already reached the point where he wasn’t going to throw the rest of the weekend,” Legends manager David Klein said. “So I figured, just let him finish what he started. Bulldog performance.”
It was the final home game of the summer for the Legends (21-20), who are fighting for a playoff spot in the Far West League. There are two games left in the regular season, both at Alameda this weekend against Neptune Beach, another team seeking to lock up a spot in the postseason. Even with a sweep, nothing is guaranteed for Menlo Park.
“We need some help from other teams, but basically the approach is just win,” Klein said. “We can’t control what else is out there. We just need to win ballgames.”
Despite retiring the side in order in the top of the first, Dodakian didn’t hit his stride on the mound until the third inning. The Pearl struck for a pair of runs in the top of the second, starting with a leadoff single and a double poked down the left-field line to make it 1-0. A passed ball doubled the deficit for the Legends.
Dodakian struck out four of the next five batters, relying on movement on his four-seam fastball that resembled his two-seamer plus a splitter, knuckle curve and change-up.
“Today was the first day I was able to mix in all my pitches,” said Dodakian, who scattered seven hits and walked none. “As a starter, I had to figure out how to use my other pitches effectively, and it took me two innings to figure it out, I guess.”
Menlo Park cut the deficit in half in the bottom of the second when shortstop Kyle Zirbes flicked a looper over the second baseman to plate Jeremiah Pierson, who opened the two-out rally with a single.
But the big blow didn’t come until the bottom of the third. Dane Vande Guchte starting things off with a leadoff double and Logan Trowbridge followed with a single. The next batter, Geo Saba, who graduated from St. Francis-Mountain View and is on the Stanford baseball roster, lined a ball off the fence in right field to tie the game at 2-all.
Trowbridge was waved home and thrown out for the first out, but that hardly seemed to matter after Danny Miller crushed his ninth home run of the summer off the netting in right field — a two-run shot that gave the Legends the lead for good at 4-2.
“I just saw a ball and I just tried to hit it hard,” Miller said. “I think it was a fastball.”
Miller is one of three Far West League players named to the All-Star Game, in addition to Andrew Herrera and DJ Zapata.
“I can’t say enough about Danny Miller,” Klein said. “The guy is just doing it in every situation.”
The offense also got a boost from the return of Jeremiah, who hadn’t been in the lineup since June 21. The Canada College product had been busy with summer school but went 3 for 4 as the designated hitter, scoring twice. The Legends are 8-2 with Jeremiah in the lineup.
“He just wanted to come out and give some guys some rest,” Klein said. “And he was still hot.”
“He could walk out here and just play like nothing,” Miller said.
Menlo Park added three insurance runs in the bottom of the eighth, beginning with a safety squeeze by catcher Ian Josh for a 5-2 edge. Zirbes picked up his second RBI single and Vande Guchte hit a run-scoring double to right field.
But the runs were hardly necessary with Dodakian on the mound and Vande Guchte making a couple of web gems at second base in the top of the sixth.
“I get a lot of groundballs, and when my infielders are doing their job and getting to the ball, it’s awesome,” Dodakian said. “That pumps me up more than a strikeout, honestly.”
Carter Ball, a 5½-year-old who participated in the Legends Camps this summer, received the loudest ovation after he sang “Take Me Out to the Ballgame.”
Klein is currently in the process of trying to secure funds from San Mateo County in order to land a stadium at Flood Park next summer in Menlo Park.