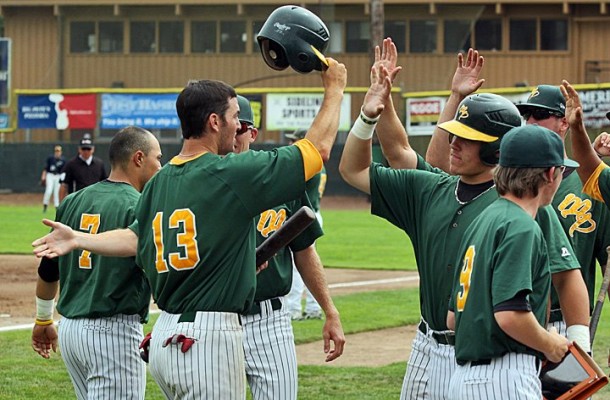 David Klein loves coaching baseball, but has questioned whether or not coaching could be a long-term occupation. However, after this weekend, David probably feels more motivated than he ever has been before. That’s because 3 former Menlo Park Legends were selected in the 2013 Major League Baseball First-Year Player Draft, quite an accomplishment for a team who is in its 5th year of existence. Grant Nelson, Brent McMinn and Tyger Pederson join 2012 draftee Rich McCaffrey as the former Legends who have been drafted, and all 3 players are expected to sign.
Grant Nelson was selected with the 270th pick in the 9th round of the draft by the Arizona Diamondbacks. Nelson, a Serra-San Mateo grad, had a huge year for the Saint Louis U. Billikens, starting 60 of the 62 games this year while primarily playing catcher. Nelson hit .338 for the year with 8 doubles, 3 triples, 5 homers and 32 RBIs. Nelson led the team in on-base percentage (.433) and helped the Billikens with the Atlantic-10 championship and advance to the NCAA tournament. Grant had originally been a third baseman until last summer, when, in his 2nd season for the Legends, he worked with David on becoming a catcher. Grant took off from there, catching for the Legends for the 2nd half of the summer and hitting .305 with 9 doubles, a team-leading 6 triples, 2 homers and 25 RBIs. “The Legends truly changed my life.” Grant said. “By reintroducing me to catching, it helped me grow as an all-around player. Those summers were 2 of the best summers of my life.”
Brent McMinn came to the Legends in the 2nd half of the 2012 season and was a nice addition to a team that had started to suffer injuries. Brent saw more time as a hitter for the Legends, going 4-15 with 2 RBIs in 7 games. He also pitched 2 innings for the Legends, getting 2 strikeouts and a save in his 2 appearances. Brent played limitedly at the University of Nevada-Reno, pitching 6.2 innings over the season due to struggles with his own injuries. McMinn was selected 536th overall in the 18th round by the New York Mets.
Tyger Pederson was planning on being a Legend for his 3rd straight summer until midday-Saturday. That’s when he got the call: He was drafted with the 994th pick in the 33rd round by the Los Angeles Dodgers. A Palo Alto graduate, Tyger had spent all 4 years at the University of Pacific, hitting .262 on the year with 5 doubles, 2 triples, 1 homer and 14 RBIs. Tyger has been a driving force for the Legends in his 2 seasons, batting .347 with 6 doubles, 2 triples, 1 homer and 15 RBIs as well as 11 stolen bases in 2011 and hitting .297 with 8 doubles, 1 triple, 19 RBIs and a team-leading 19 stolen bases in 2012. “This is a dream come true,” Tyger said. “The Legends were a huge part of this, as the provided me with a great opportunity to play baseball everyday against the best competition possible. It helped me improve my game in all aspects.”
Congratulations to Grant, Brent and Tyger and we wish you guys the best of luck in your future professional careers!