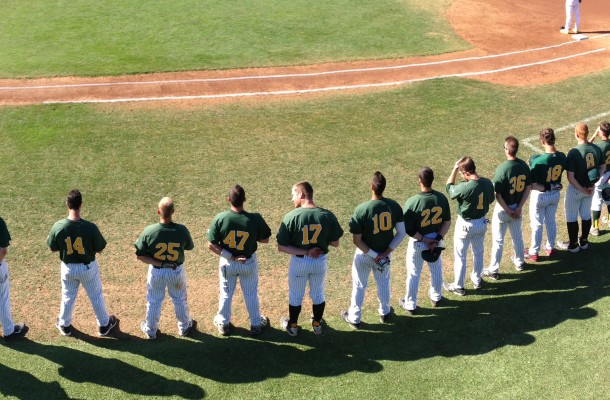 Coming off a successful campaign in the summer of 2013 during which they finished third in the Far West League and only one game from the championship, David Klein and the Menlo Park Legends were poised to take the California Collegiate League by storm. The Legends, along with the Neptune Beach Pearl, the Walnut Creek Crawdads, and the Pacific Union Financial Capitalists, combined forces to add a new division to their new league at the end of 2013, and the 2014 season offered the newcomers a chance to prove themselves in one of the more competitive summer collegiate leagues in the country. In the end, the Legends finished fourth in the CCL North with an overall record of 14-31, 11-21 in league play.
Menlo Park prepared for the season by constructing a talented roster that featured returners Logan Trowbridge, Kyle Zirbes, Wes Hoskins, Steven Miller, Dane Vande Gutche, Brandon Coborn, and DJ Sharabi, as well as a bevy of new additions to the Legends family. The Legends also found a new home in Hurley Field at Palo Alto High School due to ongoing renovations at Cañada College and a more central, easily accessible location just off El Camino Real. David Klein brought back coaches Dustin Woodward and Bill Ryan for the 2014 season and, with the help of McKenzie Campana and Michael Aronson, bettered the fan experience, adding a broadcast team and a number of improvements on the gameday operations front.
Plagued by injuries to and early departures from key players like Sam Alton, Tyler Rios, DJ Sharabi, Parker Swindell, and Mark Mathias, the Legends struggled in the first half of the season, going 5-17 in their first 22 games. Their first homestand at Hurley Field provided a bright spot, as the Legends beat the Capitalists 7-0 in the opener then two days later won their second contest of the year against the playoff-bound Neptune Beach Pearl.
Despite the early success at home, the Legends’ first half established what would prove to be a season-long theme of hard-fought one-run losses, which made up an incredible 16 of the Legends 31 losses on the season. On average, Menlo Park’s losses were decided by just 2.94 runs, a stark contrast to the 5.07 run margin by which they claimed their victories. “I think our lack of depth in the bullpen was a factor,” Klein explained. “We lost a lot of leads. We competed every single day, we just had trouble scratching out wins in close ballgames.”
“I don’t think there’s a single solution to it,” Woodward added. “We lost so many one-run and two-run games, and we had a bunch of games where we took a lead into the ninth.”
Woodward maintains that player ability was not the problem. “Honestly, from top to bottom I felt like we had more talent than any of the other teams in the division,” he said. “It’s hard, when you’re losing all those one-run games, it takes the wind out of your sails.”
Although the one-run defeats continued to be an issue, the Legends showed considerable improvement in the second half of the season, going 9-14, 7-10 in the CCL. Many of the second half losses came at the hands of powerhouses like the San Luis Obispo Blues, the Santa Barbara Foresters, and the Humboldt Crabs, teams against which the Legends went a combined 0-10. However, the Legends finished on a high note, stringing together a 6-6 record in the final weeks, including victories in two of the last three games of the season.
The strong finish hinted at the level of play at which the Legends were capable of playing, but couldn’t due to a variety of factors.
“If it was a full 162 game season I really believe we would have finished at the top of the division,” Klein said. “We were playing well at the end of the summer, but we had just gotten too far back. A lot of the junior college hitters took awhile to adjust to the harder pitching, although it was a good experience for them [as they] adapt to Division 1 play.”
A number of Legends also suffered from nagging injuries throughout the course of the season, which contributed to the depletion of the roster as the season went on. Dylan Cook, Trevor DeMerritt, and Jordan Winawer were banged up for most of the summer, Devin Smith sat out a substantial number of games in the final weeks due to arm troubles, and Tyler Cyr, Kyle Zirbes, Cole Johnson, and Wes Leow left the team earlier than expected with health concerns.“It was a tough season when it came to injuries,” said head coach Dustin Woodward. “I thought we had a good group of guys that as a whole would’ve stacked up well against last year’s team.

Many of the injuries forced the remaining healthy players to change positions and approaches based on what the team needed, something longtime pitching coach Bill Ryan saw as a strength of the 2014 squad. “Everybody was accepting of different roles than what would normally be established,” Ryan said. “I’d say that overall the team learned to make adjustments, and that was the thing that I think they did best.”
The Legends’ losing record did not stop them from making a splash locally and nationally. Cook, DeMerritt, and ace Matt Blais earned CCL All-Star honors and represented the Legends in the 2014 CCL All-Star Game, which took place on July 16th and was nationally televised. In addition, the Legends enjoyed the best season attendance-wise in their history, as over 1,200 fans young and old came out to the yard over the course of the summer. The Legends Baseball Experience also saw significant growth in 2014, adding two more locations and 30 percent more campers, giving more kids the opportunity to participate in the most unique and fastest growing baseball camp on the Peninsula.
With the 2014 summer season in the rearview mirror, Klein and the Legends have already begun looking ahead to next summer and beyond. Klein has already signed a number of players for the 2015 season and plans to gather high-energy, dedicated Division 1-caliber players for next year’s team. The Legends have grown each year, and Klein anticipates 2015 to be no exception.
“I expect a full recovery next year [record-wise],” he said. “I fully expect us to make the playoffs.” Woodward sees recruiting and resilience as key components of a rebound next year. “[Recruiting more roster depth] would provide us with more opportunities down the stretch,” he said. “You have to be prepared for failure. Everything evens out eventually, we just didn’t get enough time this season for that to happen.” Ryan echoes Klein’s and Woodward’s optimism. “We’ll get it to where it needs to be, where things will fine tune themselves. They’re growing pains.”

The Legends would like to thank a number of people for making the 2014 season as successful as it was, on and off the field. A big thank you goes out to all of the committed fans, parents, and campers, as well as the ever-generous host families, who made summer ball with the Legends possible for a number of nonlocal players. The Legends are also grateful for CCL Commissioner Pat Burns and all of the teams in the CCL who proved to be very formidable opponents. Head coach Dustin Woodward, pitching coach Bill Ryan, bench coach Andrew Klein, and trainer Sergio Sandoval deserve praise for their admirable work in the dugout and in the bullpen, as do Michael Aronson and the 2014 front office staff for their work in the office, under the press tent, and elsewhere throughout the season.
Thank you once again for a fantastic season, and FIRE IT UP!